The premiere League has been a host to some of the best teams ever assembled in world football. Manchester United’s 98 treble winning side, Mourinho’s 2005 record-breaking team, the invincibles and Manchester city’s centurions. Who among these brilliant teams takes our crown for the best side ever assembled in Premiere league football?

Jose Mourinho’s first season at Chelsea saw the blues win the premiere league after 50 years, breaking numerous records in the process and introducing the likes of Lampard, Terry, Makelele and Drogba to the premiere league. The team conceded just 15 goals in 38 games throughout the season going on to remain undefeated at home with 25 clean sheets. Chelsea’s title winning side arguably had the best defense in premiere league history with Terry, Ricardo Carvalho, William Gallas and Paulo Ferreira making sure the ball stayed out of their net. The team collected a total of 95 points in the premiere league, a new record at the time and conceded the least amount of goals ever at home, just 6. It was a team filled with super stars, players who would go down in Chelsea’s history as legends. The team ranks fourth in our all-time best squads in the premiere league.

Manchester city’s 2017/18 record-breaking season was nothing short of incredible. They redefined what it meant to be champions of England, breaking a host of long-held records and winning the league cup as a domestic double. Pep’s team won the premiere league with the highest number of points, 100, most wins in a single campaign, 32, scoring a record 106 goals and winning the greatest number of consecutive games,18. With many skeptical of Pep’s possession football, the masterclass of Fernandinho, David Silva and De Bruyne in midfield proved that the Spanish coach was not only a football genius but has revolutionized the game with his ball playing tactics. Today goalkeepers are judged on things far different from their shot stopping abilities and defenders criticized for their lack of passing range. Last year Chiellini blamed Pep for ruining a generation of Italian defenders, stating that young defenders learn the game the “Guardiola way” with good ball playing skills but terrible man marking and defensive positioning. This itself is an example of what the Spaniard has brought to English football. The campaign however does not put Manchester city at the top of the “best premiere league sides” ever. The touchline ranks them as the third best side ever assembled in the premiere league. 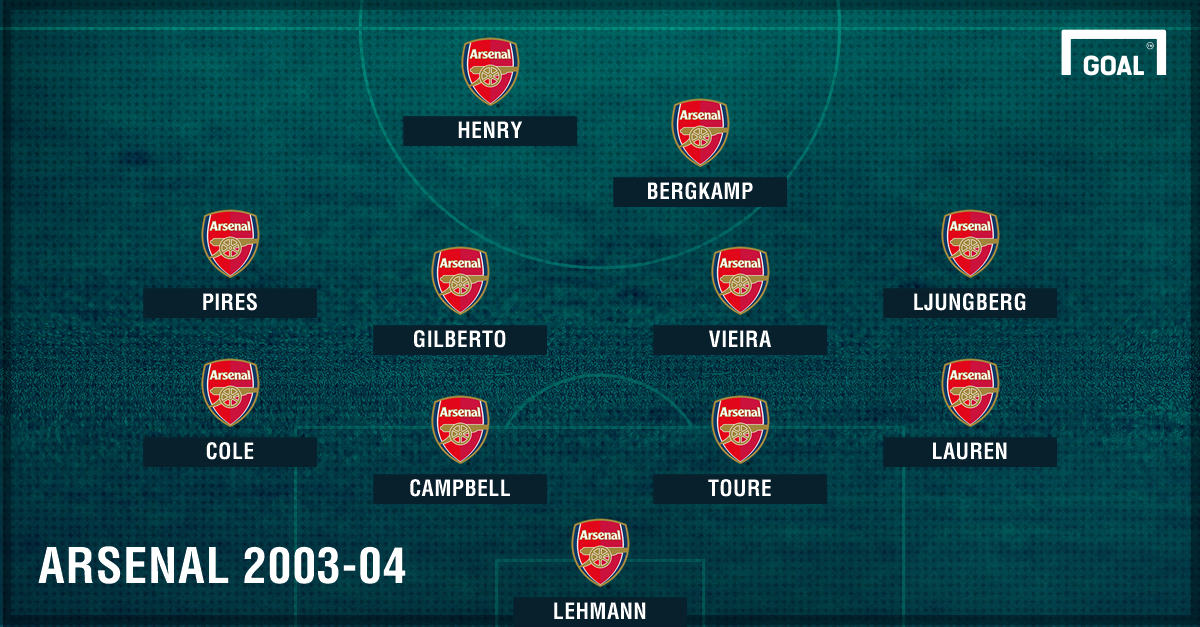 26 Wins, 12 draws, 0 losses. Arsenal’s 2003-2004 title-winning side might just be the best premiere league team ever. The gunners went on to win the league with a lead of 11 points, unbeaten all season, the only team to do so in the premiere league era. Thierry Henry and Bergkamp were at the heart of the gunner’s performances with the likes of Viera, Lehman and Pires holding up the other end of the pitch. The arsenal goalkeeper kept 21 clean sheets in the league, backed up by a defense consisting of Ashley Cole, Toure, Sol Campbell and Lauren. The season is remembered as one of the most successful campaigns in Arsenal’s history. Arsene Wenger’s brilliant attack-based approach saw Arsenal overcome Liverpool, beat chelsea and complete the campaign unbeaten against Leicester city on the final day of the season. Henry was the highest goal scorer in the campaign with Lehmann winning the golden glove. Despite being one of the very best sides English football has ever seen, the invincibles rank second in our all-time best teams in the premiere league.

The best side ever assembled in the premiere league must be Manchester United’s treble winning team in 1998-99. With Sir Alex Ferguson at the helm and blessed with players like Gary Neville, Paul Scholes, Ryan Giggs and David Beckham, it was only a matter of time the English team won all three titles in a single season. It remains one of the most successful campaigns in English football history with no other premiere league team achieving the feat since. The team maintained a 33-match unbeaten run on their way to the premiere league, Fa cup and champions league title. The highlight of their campaign was the champions league final where Ole and Sheringham scored late extra time winners to complete United’s historic comeback against Bayern Munich and give the English Champions the European Cup. The team stands out not only for its consistency throughout the season on all 3 fronts, but also because this team managed to beat some of the best squads in world Football at the time including, Juventus, Bayern Munich, Inter Milan and Barcelona.

These teams stand out for their relentless hard work and consistency throughout their season, generating legends along their way and breaking records left and right.  With Manchester city on the verge of a potential quadruple this season, who knows how the rankings might change in the future.