The season is approaching its end with us holding our breaths before every game. While Juventus and PSG have all but won their respective leagues, the race for the Bundesliga and premiere league is still on.  A nine-point lead leads us to think Barcelona are favorites to win the La Liga. With the first leg of the champions league over, 8 teams still have a chance to book a place in the semi-finals. With six English teams still competing in European competitions, Chelsea and Arsenal are in the running for the Europa league. It seems like the perfect chance to discuss potential winners and put in a prediction for the end of season tables.

The last time a non-Bayern team won the league was back in 2011-2012. Klopp’s famous Dortmund side comprising of stars like Lewandowski, Gotze and Reus beat Bayern to the title with a lead of 8 points. Fast forward 7 years and Dortmund are one point behind leaders Bayern with 5 games to go. The reigning champions had a shaky start to the season with Dortmund gaining a 10-point lead by January. Niko Kovac’s first season in charge of Bayern has been dull compared to the standards expected at the club. 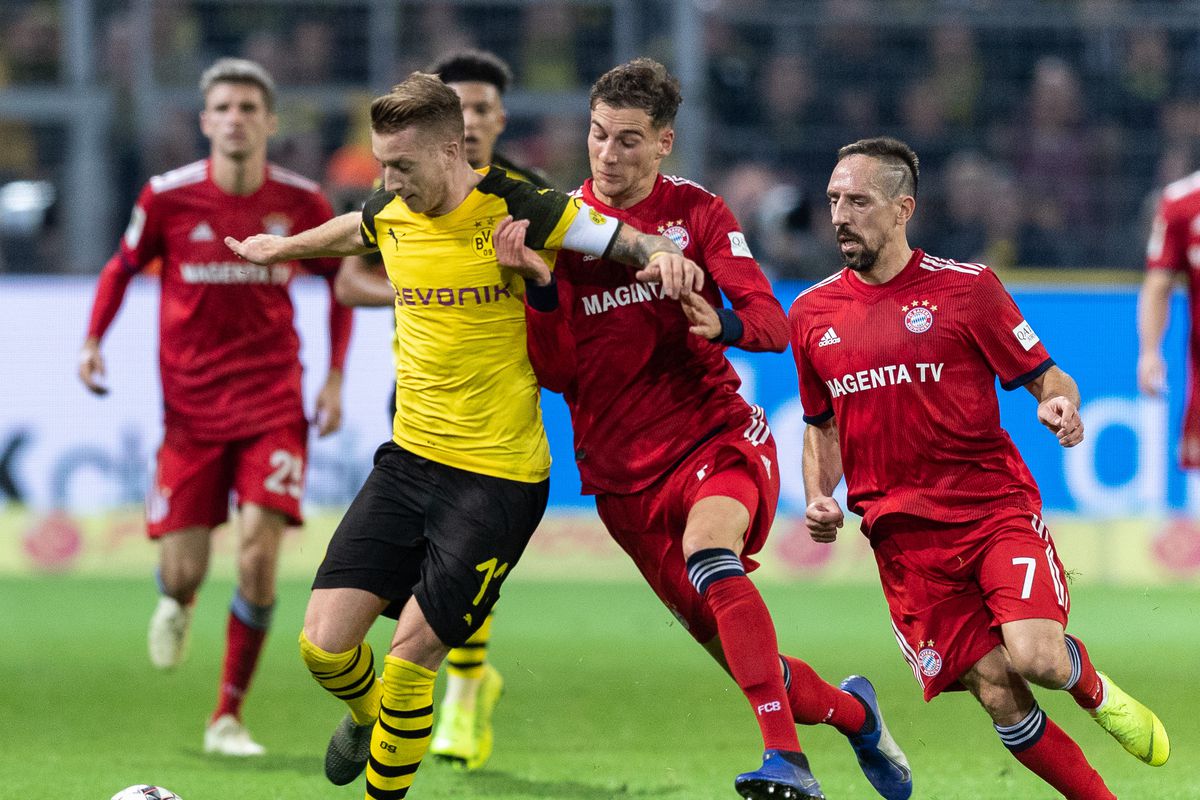 Dortmund seem to have found their lost form and look to get 3 points from every game. A young talented squad has enabled Lucian favre’s side to give Bayern a run for their title. Jadon Sancho has proven to be a revelation for the German side bagging 13 assists in the league, more than any other player. Teeing up with the likes of Alcacer and Reus, the English star has left Guardiola thinking about his decision to sell the youngster. While the title can go either way, Bayern are the favorites to lift the title in 4 weeks considering their recent form and the squad at their disposal.

The Touchline expect Bayern to retain their title with a lead of 2 points.

This season’s premiere league has been a dream for any football fan. With four teams fighting desperately for the top 4 and Liverpool and Manchester city going head to head for the title, who knows how the table will look four weeks from now. The top position in the league has been exchanged between teams for a record 26 times, with all top six teams still in the running for European competitions.

Liverpool currently sit at the top of the table with a two-point lead while Manchester city sit second on 85 points and a game in hand over Liverpool. Chelsea (66 pts), Arsenal (63 pts), Spurs (67 pts), and United (64 pts) are all playing for the last two champions league spots. Manchester city head into a make or break run of games, first playing spurs at home in the champions league and premiere league, heading over to old Trafford the next week. Liverpool who have never won the premiere league since its inception will be hoping city slip in the coming weeks, with no top six matches left the red’s look to win all their remaining games.

The quality of players in the league this season has been impressive. Both Raheem sterling and Paul Pogba are having the best season of their careers with 17 and 13 goals respectively. Liverpool’s Van Djik has proven to be one of their most consistent players and with Robertson plus trent alexander as full backs, the team have one of the most formidable defenses in Europe conceding only 20 goals in the league, losing 1 match throughout the campaign. Hazard has risen for Chelsea in a season where the blues have struggled to score goals, netting 16 goals and 12 assists. Spurs have been without Kane for a major part of their season and son has stepped up to fill the England skipper’s shoes.

With 4 weeks left till the end of the season, it seems almost impossible to predict the final table, but The Touchline gave it a go and we believe City will win the title with a one-point lead, with Liverpool finishing second, spurs take the third UCL spot and Arsenal finish fourth.

Juventus need only a win to secure their 8th consecutive league title. Paris Saint Germain needed a point in today’s 5-1 loss to Lille to win Ligue 1 for the 2nd time in a row and for the 5th time in 6 years. Paris are still at the top of the league with a 17-point cushion and are still favorites to win the league. In Spain the title race is almost over with the Catalans commanding a 9-point lead,  the second-place spot is still up for grabs,and Real and Atletico look set to battle it out.

This sums up the five domestic leagues in European football, tune in on the 17th for a champions league round up and predictions.